Back to all posts

The birth of Deadweight

It was a cold but clear Sunday 45 years ago when five teenage boys descended the back stairs into the basement of the Methodist Church in Madison, Maine. They lugged various pieces of musical equipment: amplifiers, guitars, microphones, stands, cables, drums.

Three of the boys were from Madison High School and had played together in the past. They were:

The other two were from a different school in another town 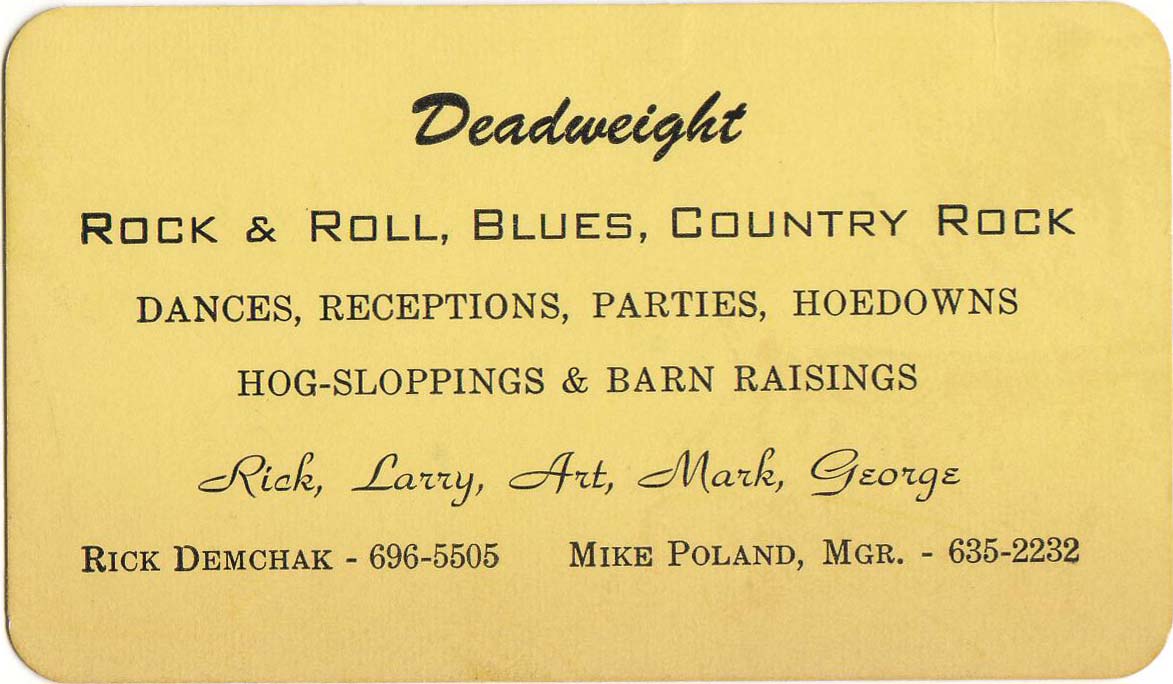 and this was an implicit audition for them.

Mark Myers, the drummer, was essentially a shoe-in. He had his own gear and had been playing semi-professionally for a few years already.

George Paolini, keyboards, guitar, harmonica and vocals, was a different matter. He had no equipment (other than a harmonica) and was an unknown quantity, having recently moved to the area.

(The five lads had been brought together by impresario Mike Poland, the only witness to the day's event.)

Arthur was kind enough to lend George some gear for the occasion. So they set up and began to go through the paces, including: Johnny B. Goode, Blue Suede Shoes, First I Look at the Purse (J. Geils version), Country Roads, Sounds of Silence.

During a break, Rick and Arthur gave George a few tips on how to play rock progressions on the guitar. It appeared the jury was still out as to whether George was up to the task of playing in the band.

And then Larry, the coolest member, who looked a lot like John Lennon and played his Fender Jazzmaster like Jimi Hendrix, had a few questions of his own for George. Did he know any Tull? (As in Jethro.) Any Cooper? (As in Alice.)

George faked his way through the interview. But there was an old upright piano nearby, and George walked over and pounded out a few riffs from Grand Funk Railroad’s Mean Mistreater.

And George was in.

Rick then suggested it was time to decide on a band name, because there was a sock hop at the junior high school in two weeks and the gig was for the taking.

Arthur had a couple ideas. The first one was voted down because it sounded too much like The Kinks and the second one was something akin to "Purple Curtain" which everyone said was nowhere near as cool as Velvet Underground, which, of course, was already taken.

They kicked around a few other ideas and began to riff on the word “Dead,” which was unmistakably cool. If any of them thought this term might  invoke copyright infringement from The Dead (as in Grateful), nothing was verbalized.

They played the gig at the sock hop, netting $9 apiece. In the newspaper, the band was billed as The Rick Demchak Trio, which was a running joke for sometime thereafter.

They did many other gigs for the next couple years and became, unequivocally, the second best rock band in the Madison-Skowhegan area.

The No. 1 group was the Craig Barnaby Blues Band. For the record, there were no other bands in the area.